The Lunada Bay Fountain named “La Fuente de los Ninos” (The Children’s Fountain) underwent a refurbishment in 2008.  The original fountain was built in 1965 as a gift to the City from neighborhood children who raised funds for its development.  The fountain is dedicated to G. Brooks Snelgrove, an engineer for the Palos Verdes Project.

After many years of deterioration the fountain was restored according to the original design concept dating back to 1964.  LBHOA led fund raising efforts and led the refurbishment effort with the City.

LBHOA has also dedicated funding for new fountain plantings.  The basic criteria for plantings included considerations for traffic visibility and drought tolerance.  White groundcover roses and low easy care greenery carry the design year round.  Seasonal interest is provided by plantings of daffodils, cistanthe, russian sage and barberry for a soft semi-formal appearance.  We celebrate the holidays with a LBHOA donation of red poinsettias! 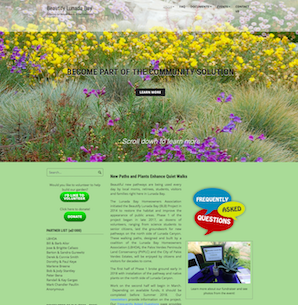